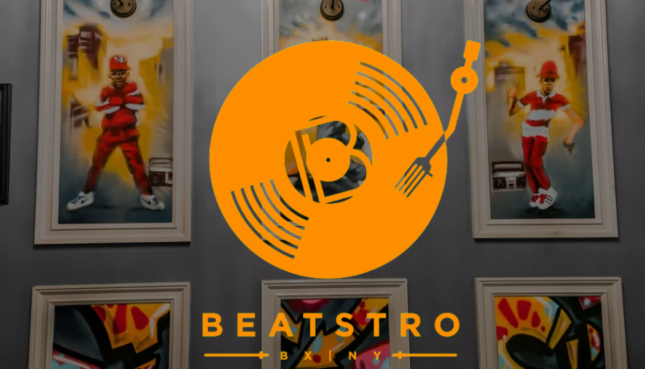 If you want to see what hip hop was like in its earliest days and get some amazing food at the same time, look no further than the Bronx’s brand new hip-hop themed restaurant, Beatstro.

The eatery is masked as a fake vinyl shop meets speakeasy. The record store front conceals what is the very first hip-hop themed restaurant in the Bronx.
A look up will show you an exact replica of the item used by Grand master Flash to create his infamous switchback technique. That piece is one of the most prized by co-owner Alfredo Angueira. The furniture is very laid-back and was found from vintage shops nearby – one of the ways this eatery is already giving back to the community it was founded in.

The idea was to throw back to the good old days, and each piece of furniture is reminiscent of what someone may have found in their grandparent’s living room during the 1970’s and 1980’s. Why this era? It was during those legendary decades that the first rap lyrics to be written in the Bronx graced the world.

The walls are a culmination of murals that depict not only pioneers in the world of rap, but also of how life used to be back when hip-hop first began. Joe Conzo is responsible for much of these and has become known as the man who “took hip-hop’s baby pictures.” He has been quoted as being excited and humbled to be part of such an amazing venture, and states he believes this is really an opportunity to see history in the making.

As part of the remix concept, the menu revolves around a variety of different ethnic and regional cuisines all rolled into one promising menu. There are dishes resonating back to Africa, Latin America, the Caribbean, and the deep south. The Chef’s idea was to create a menu using ingredients as diverse as the people who inhabit the Bronx neighborhood it sits in.

Among other dishes the menu includes crispy pork rinds, churrasco steak, and Josefina fritters, which are created with Jerk pork, Dominican cheese, and sofrito. Patrons can also choose from King’s Fried Green Tomatoes (served with hot papaya and mustard), Bacon Cracker Jacks (served with candied pecans), Mojo Chicken, or Jerk Pork Belly Ribs – the later of which comes with roasted potatoes, spring onions, collard greens, and your choice of sauce.

What sauces does a place like this have? Red stripe BBQ, chimichurri, salsa Verde, or hot Papaya mustard.

If you want to experience the amazing food and killer atmosphere of Beatstro for yourself, you can check them out at 135 Alexander Avenue in the Bronx, New York City. To make a reservation or get more information you can call them at (718) 489-9396 or visit their website at www.Beatstro.com.